Photos From The Last Few Weeks

I love the idea of carving pumpkins, but usually lose interest in the project about halfway through...it's just so much work! This year, since there are no pumpkin patches to be found, I went a different route. Much less time-consuming, and even a little cuter, I think. 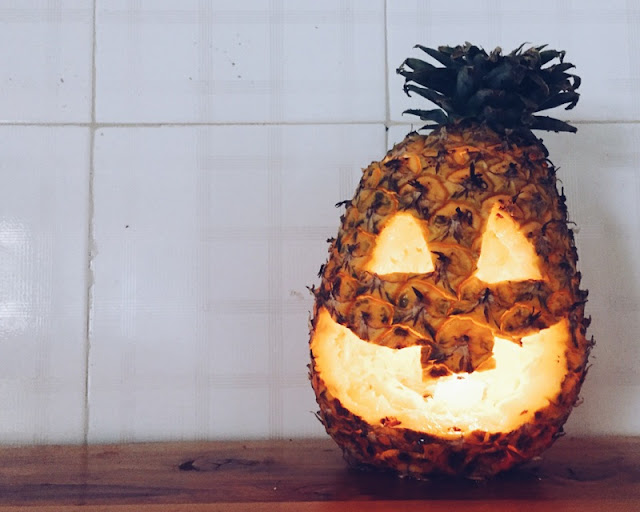 One afternoon, I brought Bramwel home with me to hang out for the afternoon. Our visiting friend, Nathan, had been a little sick and being in the house with everyone was a little overwhelming, so one-on-one time seemed a bit more manageable. Bram, of course, was happy to be given so much attention! 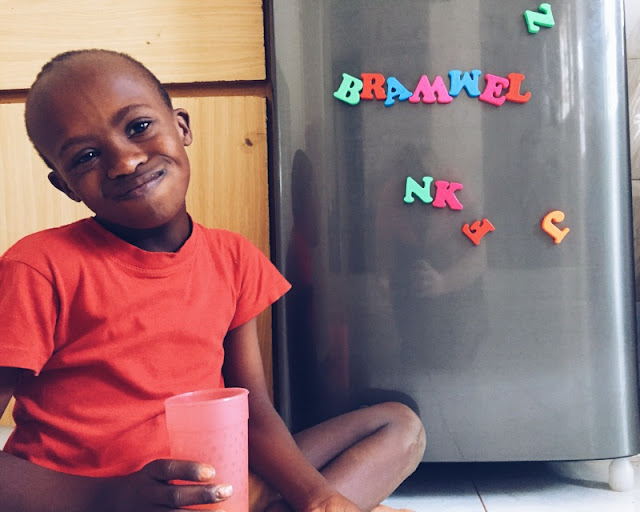 We built a fort under the sitting room coffee table, and ate snacks and drew pictures by flashlight. 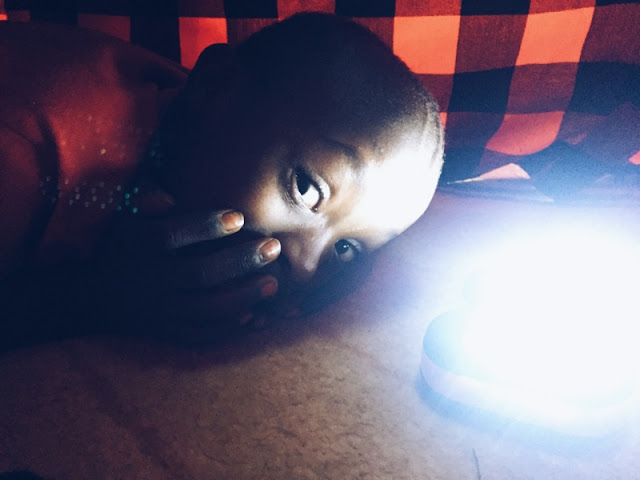 Sammy came home and knocked on the roof of the fort to surprise Bram. He loved it! She then completed the childish adventure of the day by giving Bram a mustache. {A few minutes later, I surprised him with SillyString, which he did not enjoy. He went straight to Sammy and told on me!} 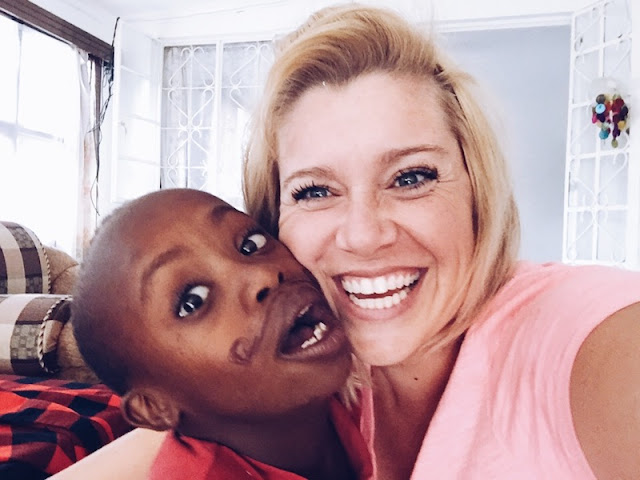 Christmas has arrived in Kitale! Since they do not celebrate Halloween or Thanksgiving {for obvious reasons!} Christmas is next! So there are dozens of small Santa's hanging all throughout this building, and even a few life-size {terrifying} robotic Santa's standing in front of stores. 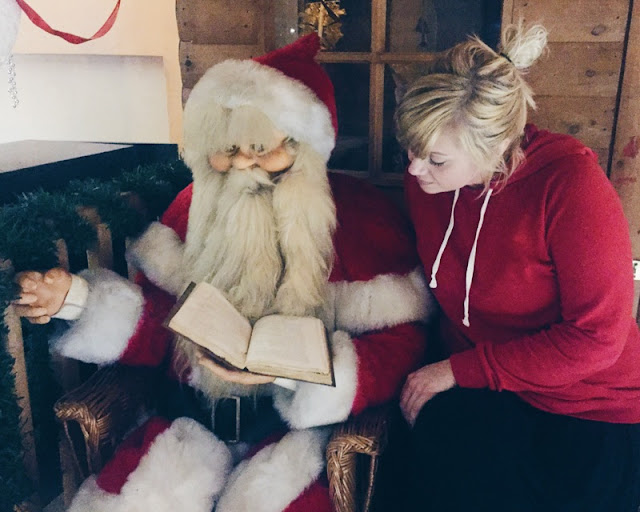 One of the highlights of the year for residents of Kitale is The National Agricultural Show. {Seriously, kids countdown the days until The Show and then do everything in their power to find the money to attend--if they're really lucky, they get to go two days in a row. I imagine my confusion over this to be the same as when people hear me describe my love for The OC Fair: "They have so many different types of food that sound super gross, but are actually pretty delicious! Once, I ate a chicken sandwich with a jelly donut stuffed inside!"} I helped one of my favorite families with admission for their five kids. When I ran in to them on their way home, the fun was written all over their faces. {Cue rimshot.} 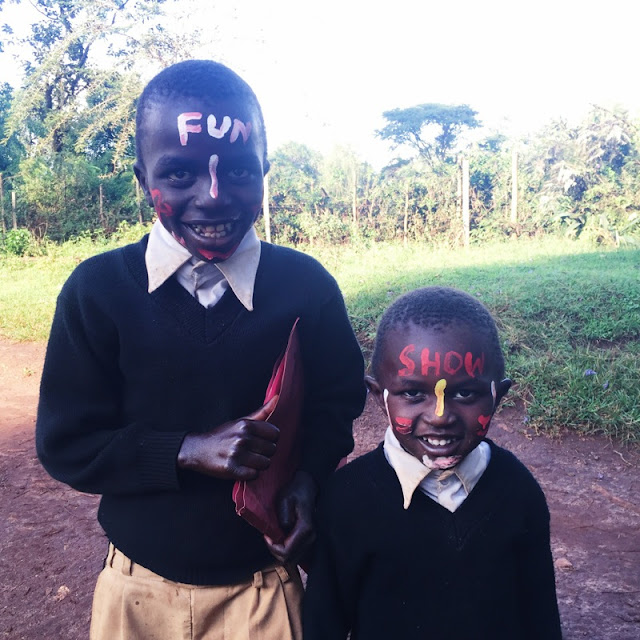 Lucy turned 13 in October! So exciting! And so crazy to realize that I have now known her for more than half of her life. 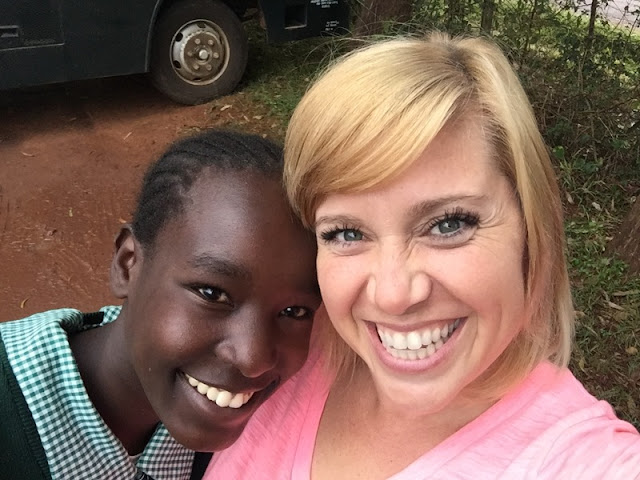 Suzie loves piggy back rides because it gives her easier access to my hair {for eating} or my shoulders {for biting.} 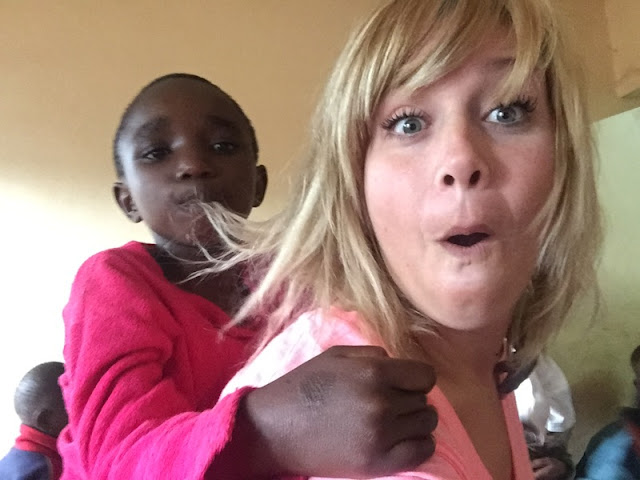 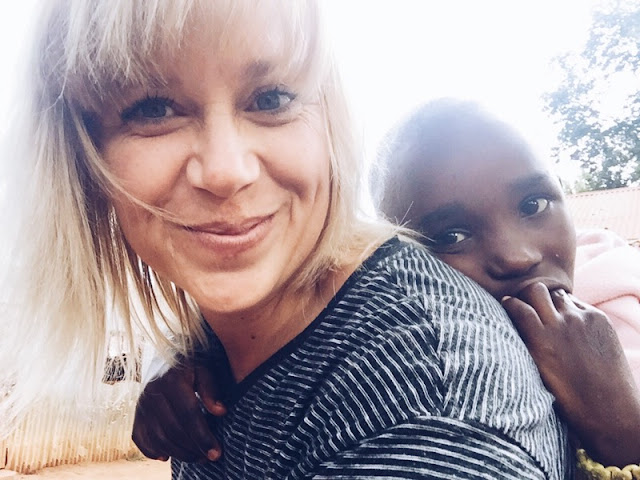 Is it nearly impossible for Moses to see a camera and not begin waving his hands like mad. He loves to watch himself move around and laugh. Joke is on me when I can't get out of his way fast enough and get poked in the eye. 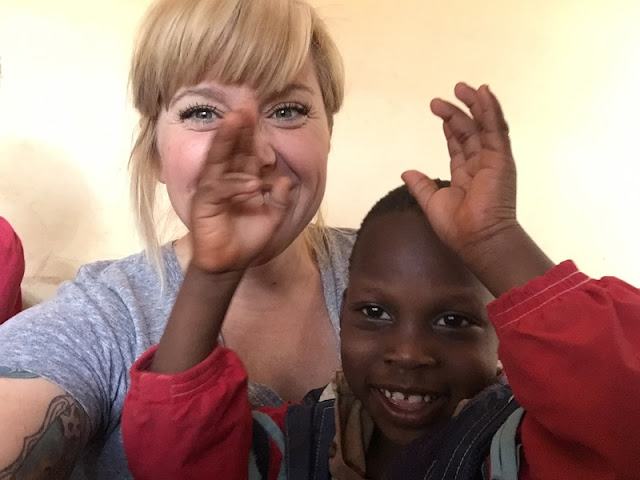 Because I can't just sit around and watch other people work {thank you to my mother for teaching me this lesson} I have attempted several jobs around the kid's house. Here is a photo of me attempting, and sort of succeeding, to peel green bananas. 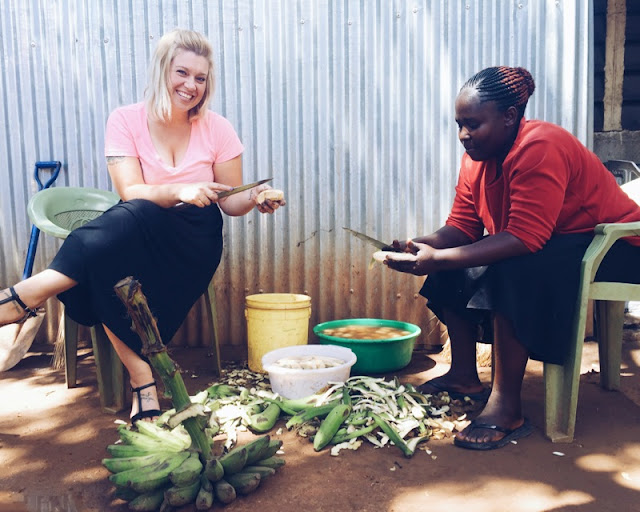 Two afternoons in a row, the lunchtime entertainment was the family of monkeys eating out of our trash. Sammy named one of them NyaNya, which means Grandma, because she looks like the oldest and wisest member of the clan. She grabbed a piece of bread and stood off in the corner eating while the rest of the dummies fought over scraps from other meals. 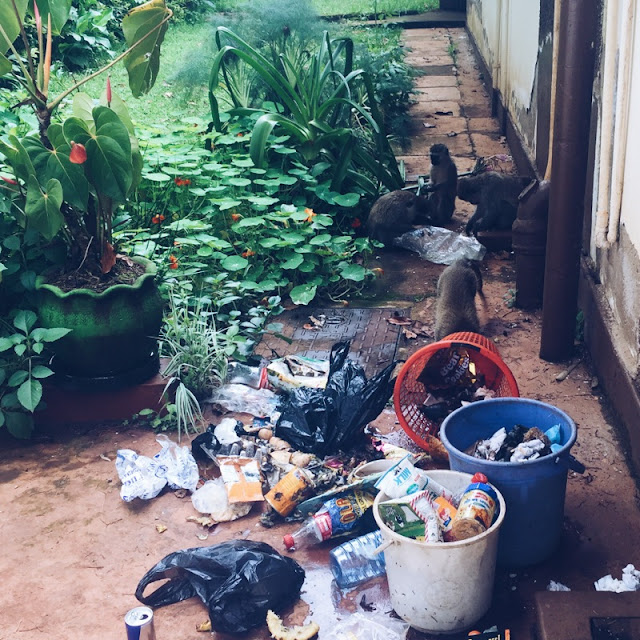 I love, love to watch the house moms take joy from interacting with the kids. Look at sweet Ana laughing at Suzie, who began to dance as soon as I took out the camera. 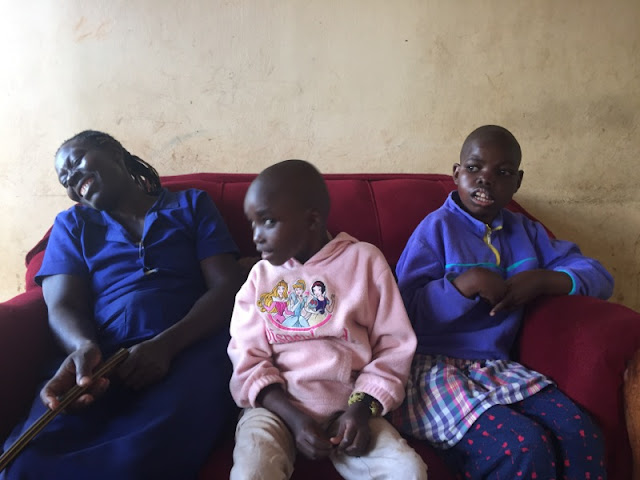 One morning when Bre was here, Sammy had a meeting in town, and we'd left the other car at the kid's house. So we called David, our favorite piki piki {motorcycle taxi} driver to bring us over. We chatted all the way over and he even slowed down so we could, safely, take this picture of the three of us. 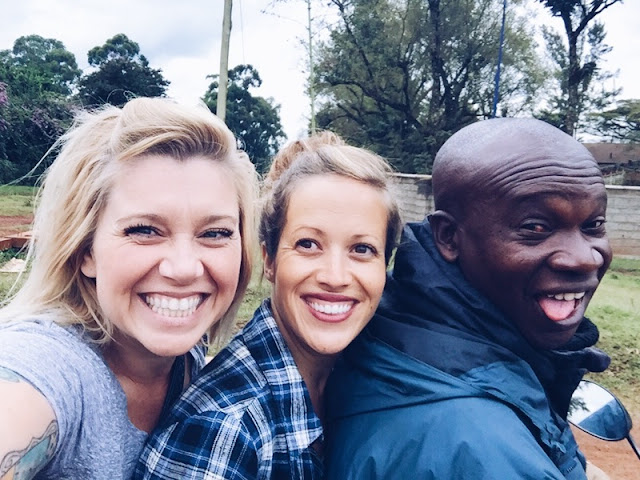 Dinah has taken to 'meowing' in about half of our conversations recently. Sammy said she used to do it all the time, but had stopped, so we're working to bring it back around. Dinah's also becoming a real champ at making un-coached silly faces for the camera. 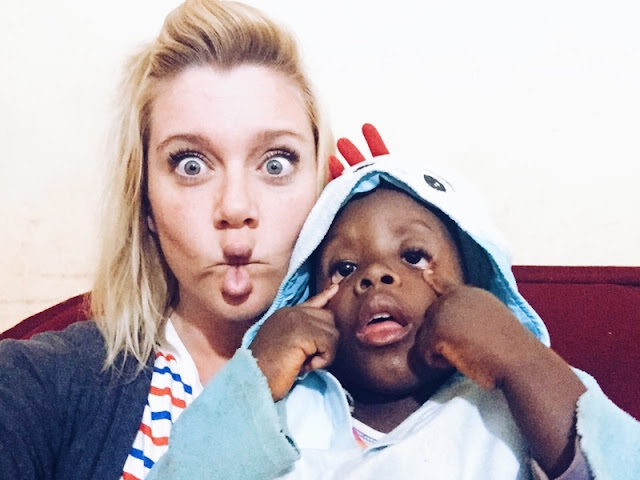 I love this shot of these two boys, Japheth and Eric David, hanging out in the side yard. 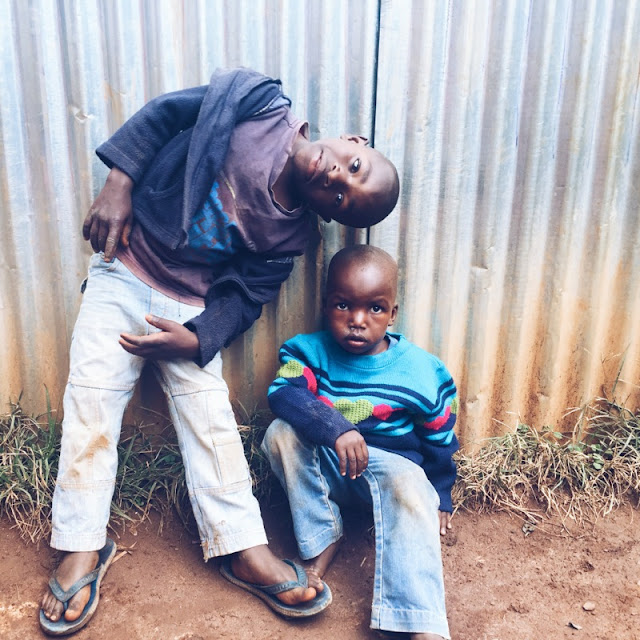 And, last but not least, this gentleman. He approached our car as Bre ran in to the bank and I locked the back doors, just in case he tried to climb in and join us. He asked for some money and we, politely, declined. But then I muttered, "I'll give him money if he lets me take a picture." right as Sammy said, "If this guy starts dancing it will be the best thing ever." Next thing we knew, he was putting on a show. 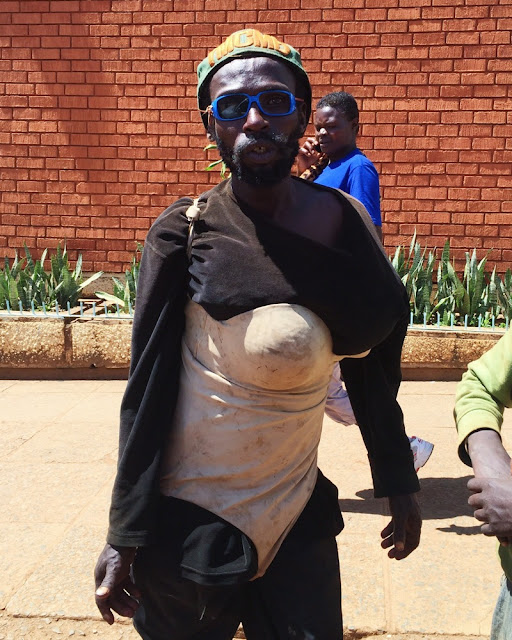 Wow! What adventures you have had! I am glad that you are helping peel green bananas and you are certainly not one to sit down much! (Where did you get that?!)
I love the FUN written all over their faces!! You're fun!