This Tuesday Included A Terrific Team

Anytime there are guests expected at the center, the morning is spent in preparation for their arrival: mats are brought outside, on which the kids congregate, and with each passing car every head turns to the street with curiosity and anticipation, hoping that engine will stop in front of our gate and it will be time for the party.

Such was this Tuesday morning. Sammy and the house moms did the morning feeding and cleaning a little faster, but a little more thorough than usual. (You know what I mean, it's the difference in the way you clean before your friends come to dinner at your house and when your mother comes to dinner at your house...) And Sammy would complete a task and then come out front to see if it was time to welcome the visitors or if, just maybe, there was time for one more quick chore.

That morning, the kids had been given corn on the cob with their tea. They were all very excited to have such a special breakfast...and I was very excited to watch a houseful of kids with missing front teeth attempt to eat it! 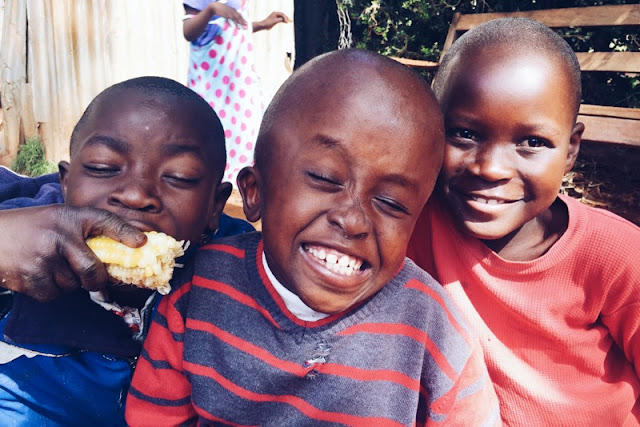 It's also pretty funny to watch the smaller kids try to grasp the concept of a camera. Once they can see themselves on the screen, they just lean closer and closer to get a better look...until what I'm left with is a sequence of gradually enlarging faces. 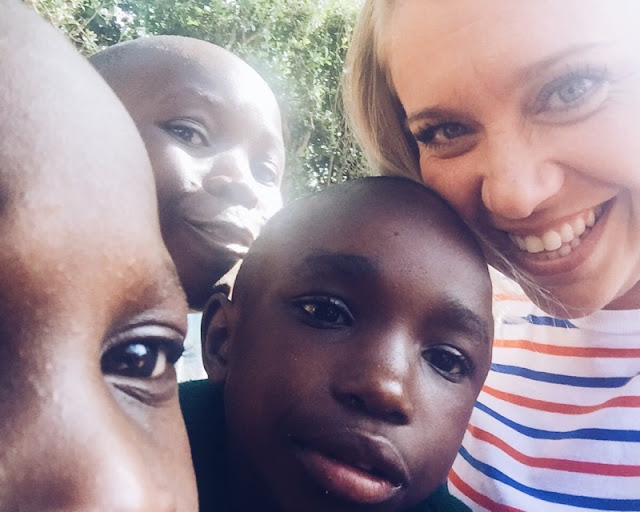 For a few hours each morning, (well, six days a week) a teacher from Greenfields comes to work with the older kids in one of the classrooms. They work on assignments they were given over break and receive focused assistance in subjects that have proven to be difficult or confusing.

While the older kids are in the classroom, the little kids take full advantage of the 'cool toys'. Willie had the time of his life as Mike pushed him around the compound on the bicycle for about half an hour. 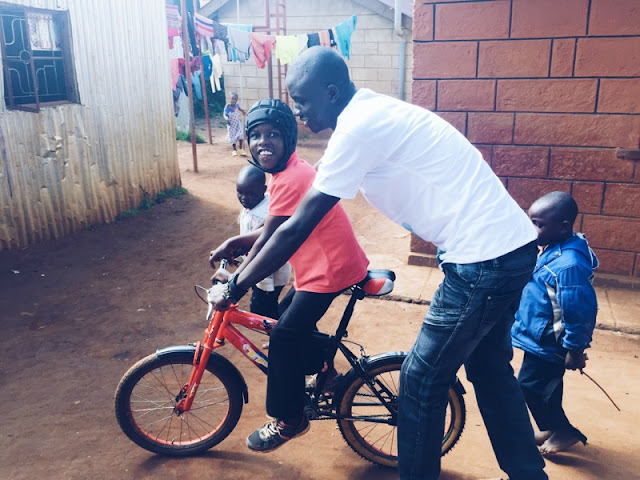 Around eleven, the team arrived. Typically, teams are made up of 10 to 15 people, usually members of one (maybe two) churches from the same number of states. This group was very different: they pulled up in a bus, for starters, followed by three or four cars. They were not only Americans (from a range of states) but also a large group of kids from a local orphanage who had come to spend their day serving the kids at the center alongside their American sponsors.

It was so fun to watch the front yard flood with guests. Guests who jumped right in and introduced themselves to the kids, worked to learn names and hear stories.

Within minutes, most of the Precious Kids had been 'adopted' for the afternoon: they were carried around, photographed like crazy (which we know they love!), fed cookies and juice (so much that most of the kids declined lunch because they were so full!), and given loads of one-on-one attention (which can be hard to come by in a home of 37 kids!) 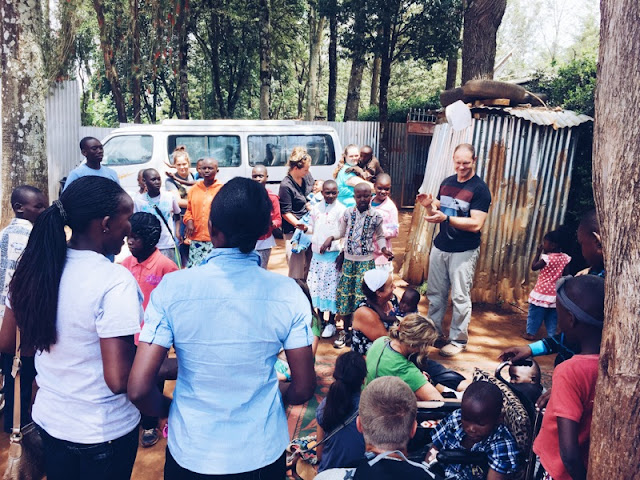 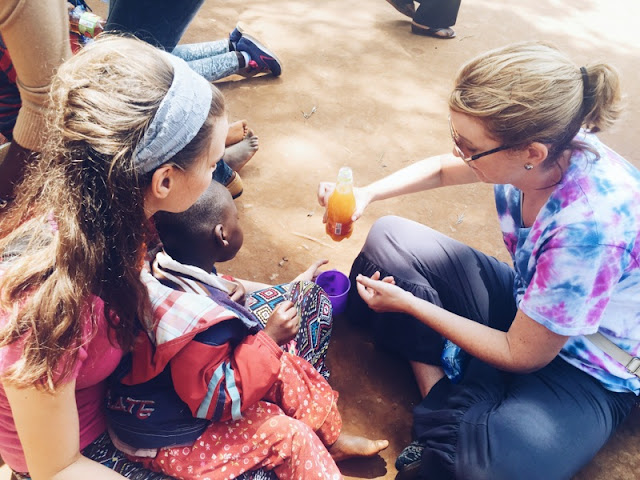 The older kids (especially the boys) are a little more stand-offish when it comes to visitors. They stood on the sidelines and watched the swarm...they definitely enjoyed the juice and cookies, though. I had to snap this picture quickly since they love to take photos of one another, but not have their pictures taken by me. (You can tell by Jabal's face--second from the left--that he's very concerned about what's happening.) 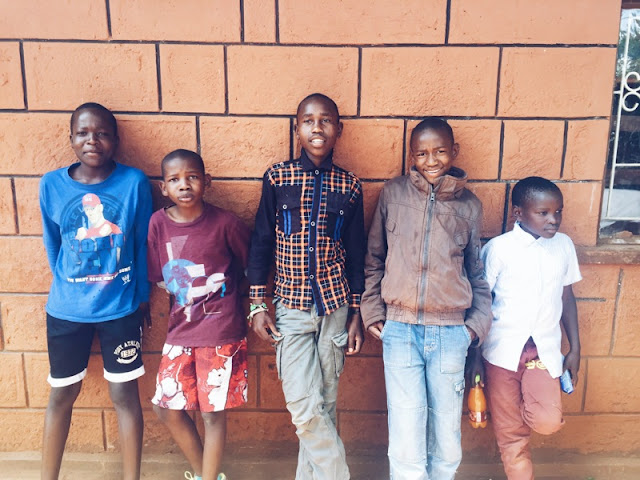 The team also brought gifts! Diapers, food, and miscellaneous household items. So kind of them! 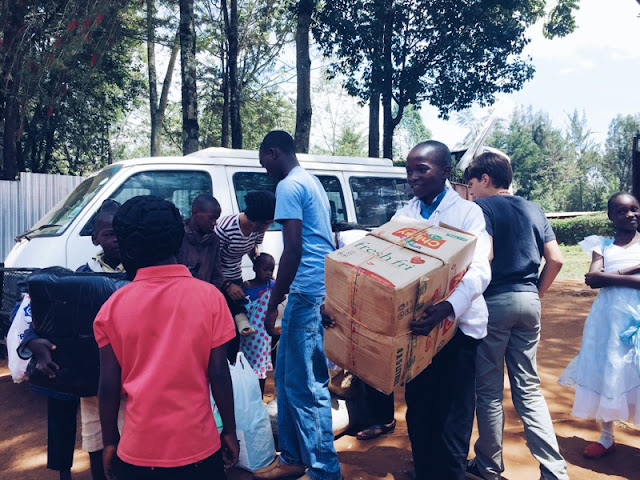 As their visit was wrapping up, we started serving lunch--well, to those who weren't too full on cookies and juice! The visiting kids stuck around, even after the team left for lunch, to help wash all of the dishes--such kind and servant-hearted guests! 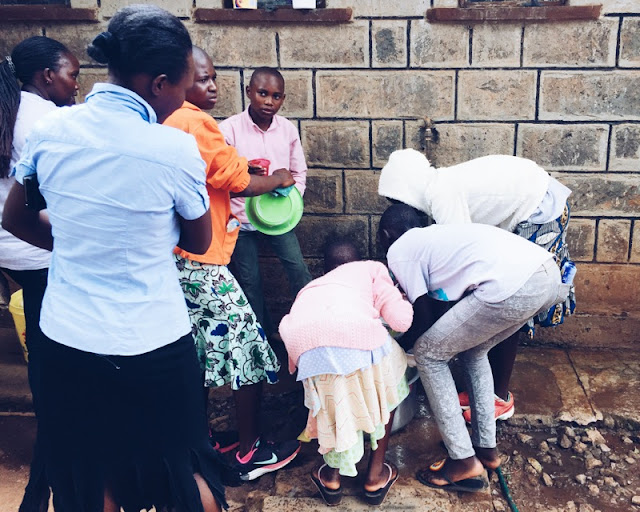 Once the team left and everyone had eaten lunch, we made our way home for quick naps and a little downtime before coming back for dinner.

I sat on the back porch while the teenagers ate dinner and the house moms cooked theirs. We joked and laughed and attempted to speak one another's languages, coaching each other as the conversation went on. One of the boys was mixing up him/her in a story (this is a common struggle for those learning English, since most pronouns are gender neutral in Swahili) and the girl's began to tease him, he stopped and yelled, "Hey! I'm trying!" and continued with his story.

Suzie made her way outside and sat with me for over an hour--mumbling in her own language--every few minutes stopping to look me in the eye and touch my cheek. I really love that girl. And I love to watch the other kids interact with her--so lovingly replying to her chatter and copying her excited movements. She really loves them.

Watching this house of kids who have not really known family be family to each other is amazing. Learning to love and be loved--to be vulnerable, to trust that their feelings will be well-received and respected. I know this changes the way they view themselves and the world around them...and, slowly but surely, I'm starting to see how watching all of this unfold is doing the same for me.
Posted by Allison at 1:29 PM

Love this one! One on one is a great idea for them...and I am so glad you're being fed too. I love you!

Thanks Allison and Sammy for your compassion, hospitality and love. We enjoyed our time so much and can't wait to come back and keep in touch. It was a day to remember for sure. Much love to you all and thanks again for such a memorable part of our trip!