I Can See Clearly Now...

Today was a great day. We started off with a quick visit to town (you know, to buy cell phone airtime, cokes, and 19 plastic children's chairs...as you do.) When we pulled in to the parking spot, I was delighted to see the Town Meter Maid (Sammy's favorite) waiting to collect the parking fee. I jumped right out and ran over to take a photo. (I wanted the action shot, of course.) 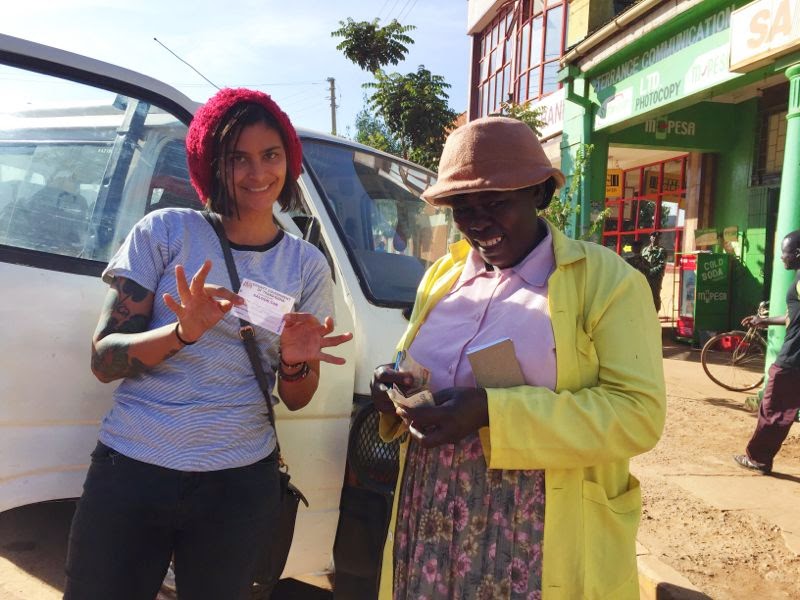 Then, the woman was upset that she didn't get to pose for the photo, so I took another. HAPPY TO. 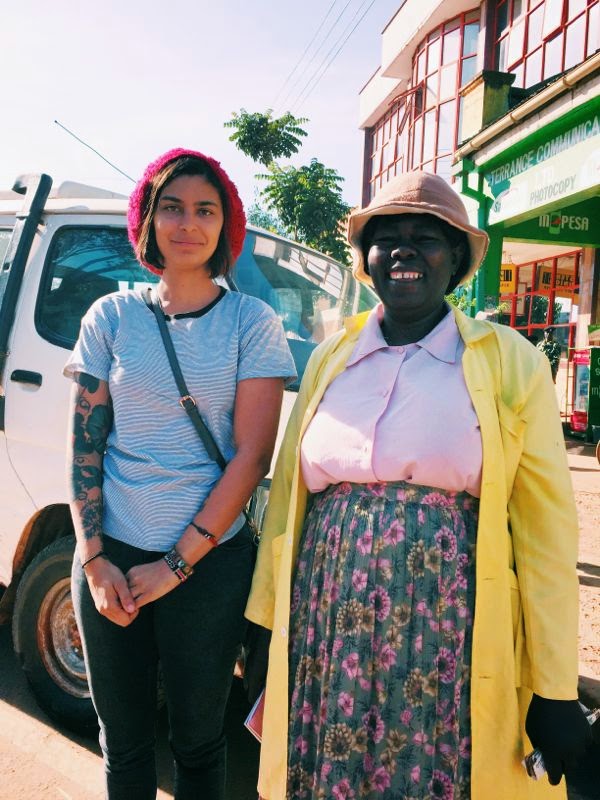 Yesterday, we picked up a team of people from America who are here to run clinics in and around Kitale this week. Today was the first of those clinics, in a town called Rafiki. In the few hours we were there, the eye clinic portion helped around 133 people who would otherwise have no access to clear vision. Fitting people for glasses and watching as they look at the newspaper again and exclaim, "I can see!" or "Thank you! Praise God!" is something that I will never grow tired of. 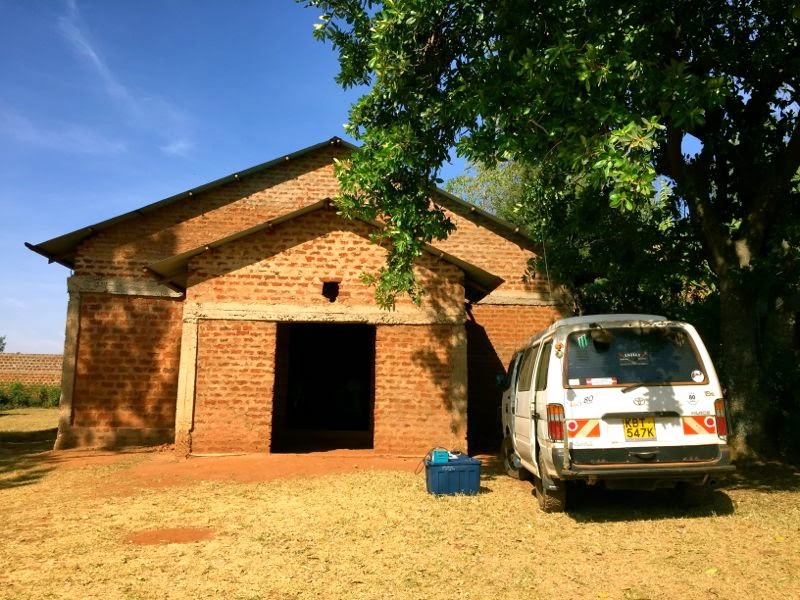 {The site of the eye clinic} 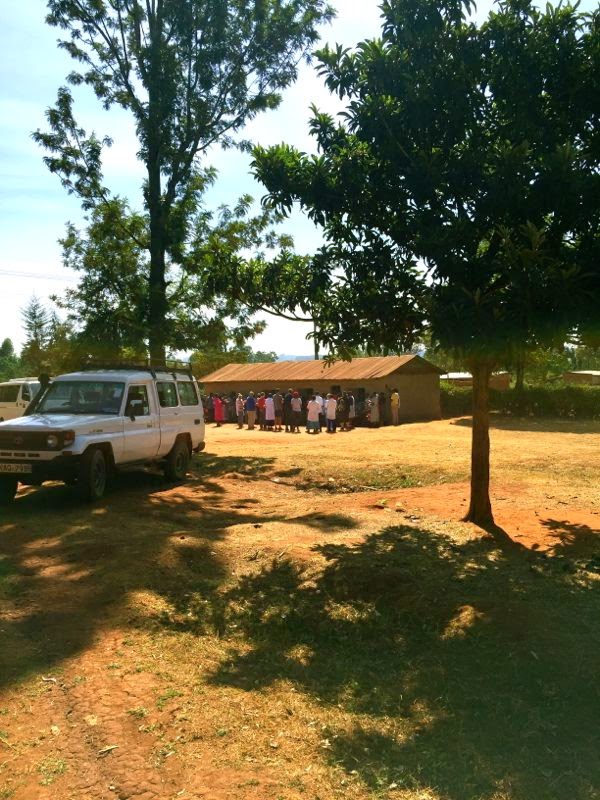 {The team and people from the community praying for the day} 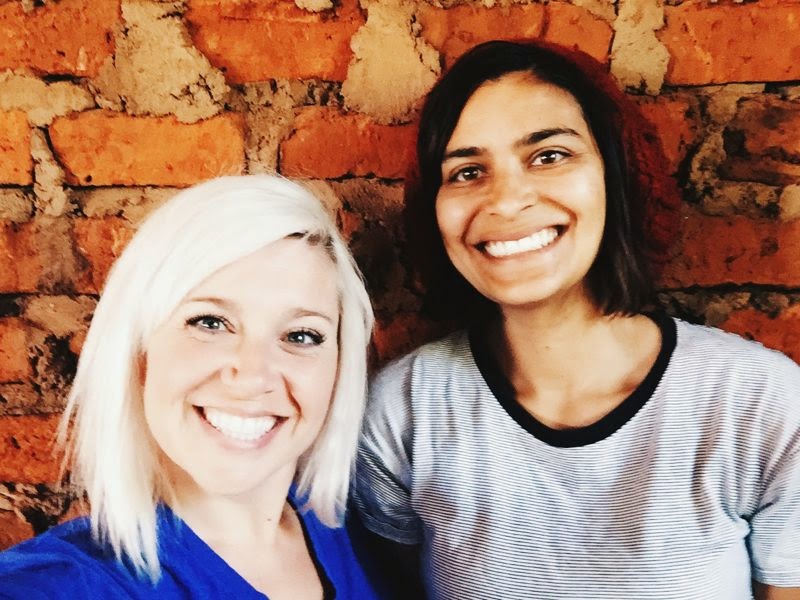 {Me and Sammy pre-clinic} 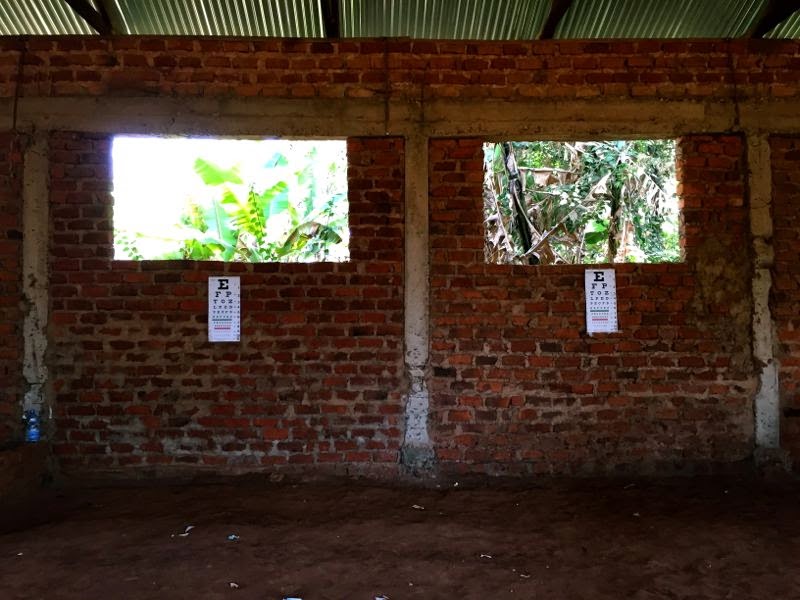 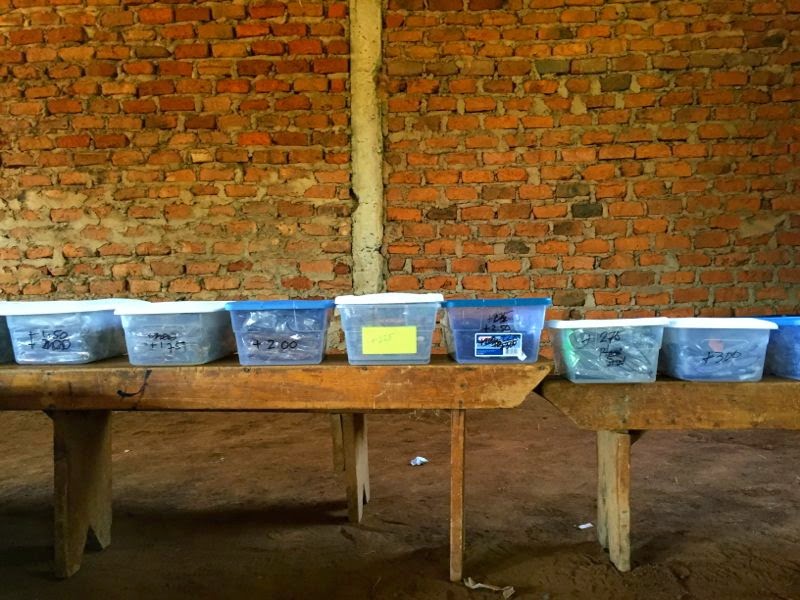 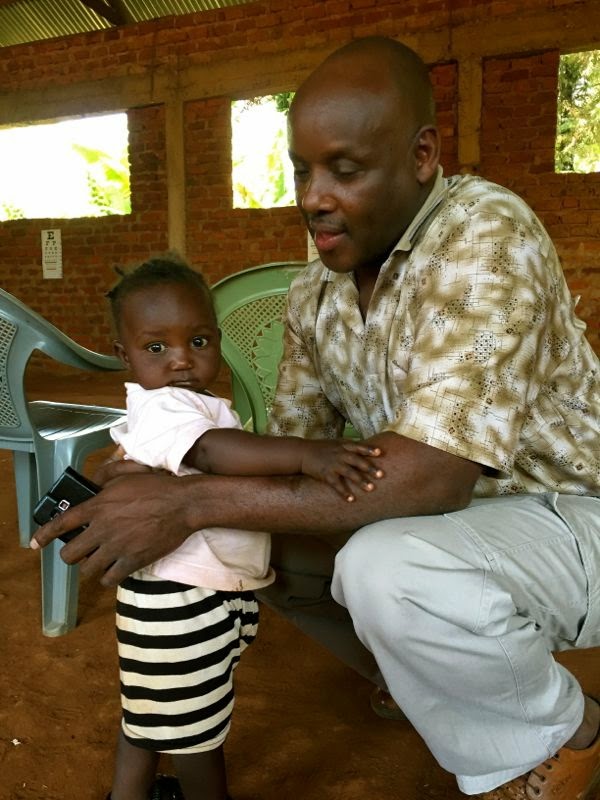 {Stonic walked in and this baby came right up to him}

Dr. Rob has been to Kenya several times, so he has the clinic system down to a science. Things ran so smoothly and people were in and out fairly quickly. The majority of the glasses we had to distribute were these gigantic grandma-looking glasses...which, I totally loved. I kept handing them to people to use for the reading test and they would, without fail, say "no, these are so big!" But I kept trying...because, I believe these can become a trend in Kitale. And, when that happens, I'll take credit for it. (I didn't buy the glasses, I just pushed them on everyone...I'm a pusher, Cady.)

This woman was the first to take them without complaint. I did a victory dance on my way to and from this photo. 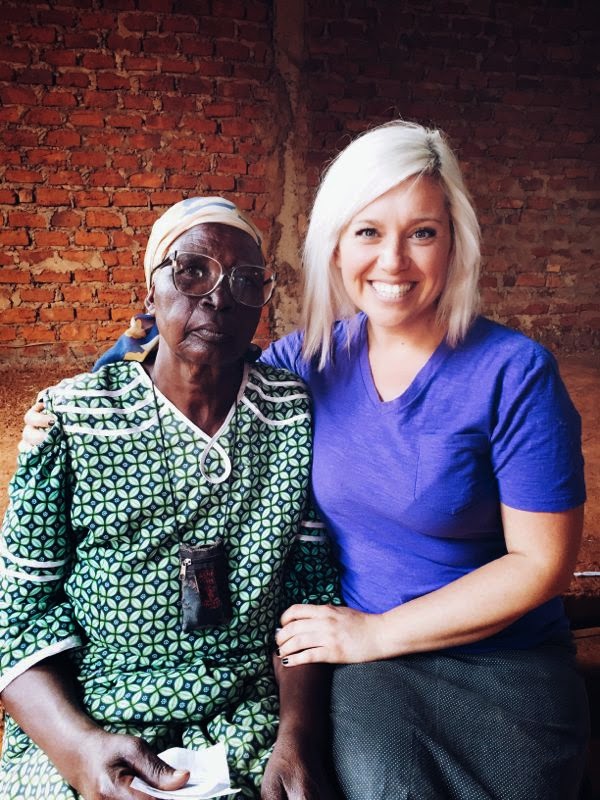 And then this woman took the giant sunglasses I offered her. I mean, really, this day just kept getting better. 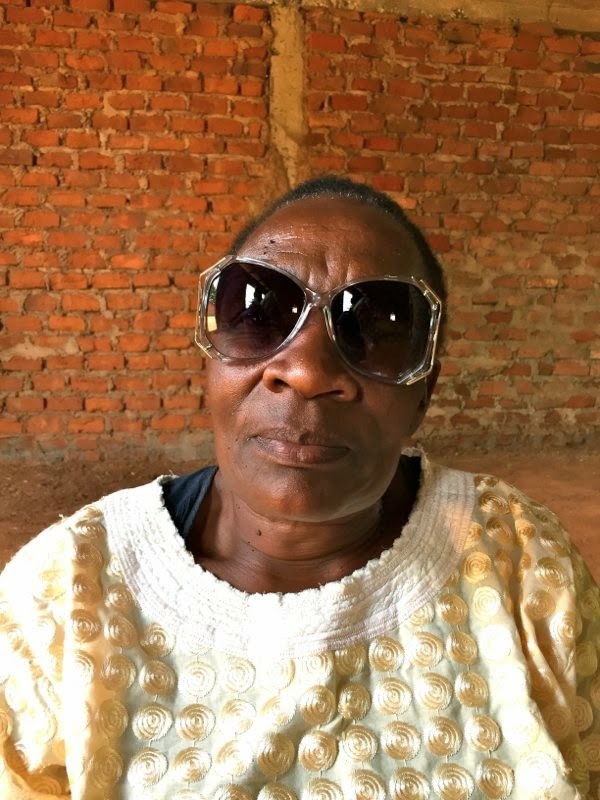 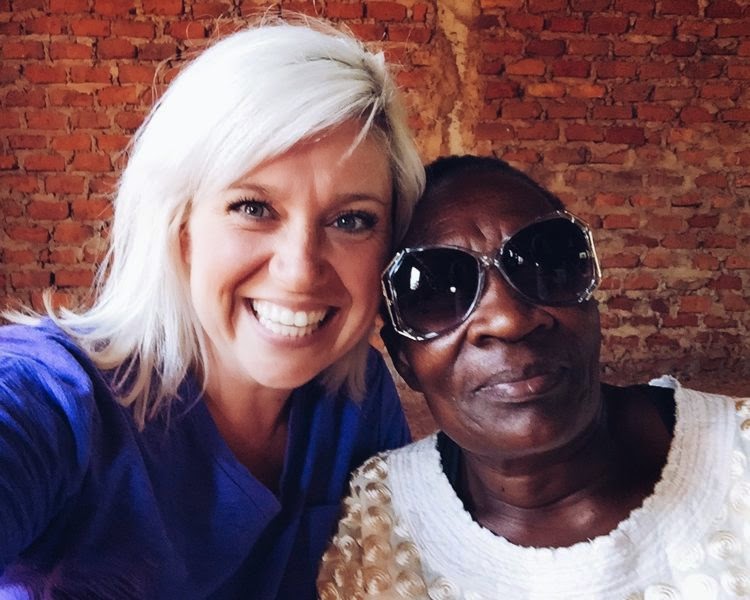 And then there was Alice. Isn't she beautiful? 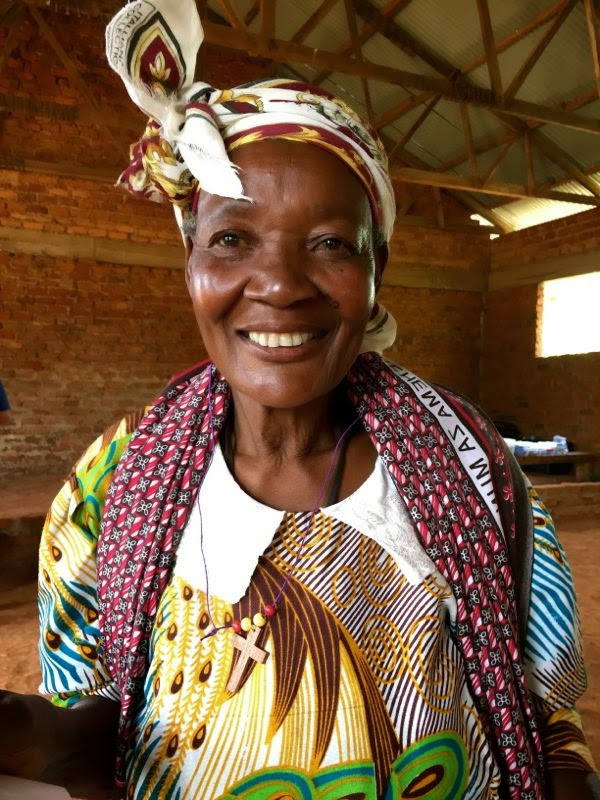 She came over with her prescription written on the paper and I helped her choose the glasses that best fit her face. Afterward, I told her, "God loves you" and she stopped and said, in very quick Swahili, "Yes, He does. I am ___ years old (I'm not great with numbers yet, so I'm not sure how old she said) and I have believed in Jesus since I was a little girl. I love Jesus and Jesus loves you! God Bless You."

Then I asked to take a photo with both of us. And when I turned the camera around so she could see herself, she burst out laughing! When I told her my name was Alice (Allison is not a familiar name in Kenya, so it's easier to introduce myself as Alice) she cheered and said, "I'm called Alice too!" and we hugged and laughed and then she went on her way. As part of the reading test, many people received eye drops. I wasn't moving fast enough (or able to tell people to put their head back and open their eyes with enough confidence) so Stonic took over. And he really loved that role. 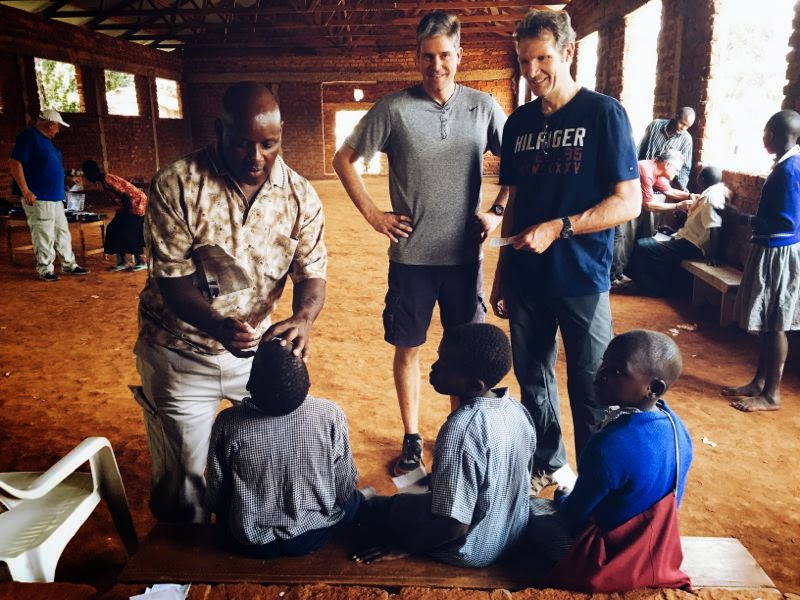 Sammy was a champ. She speaks incredible Swahili, so she was part of the duo that took medical histories from the people in line. When she took a break, she called to the neighbor kids to come and join us...and then convinced them not to be afraid of getting eye drops from Stonic. 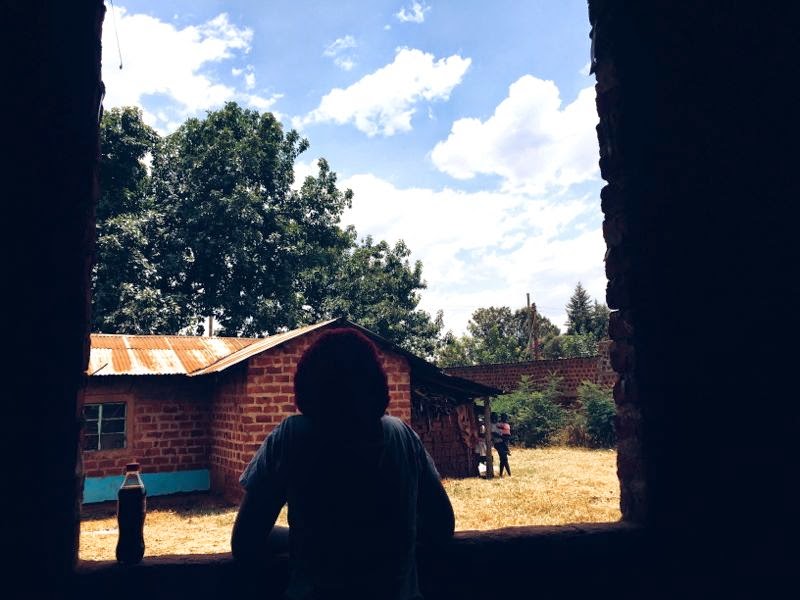 This man put on his glasses, picked up the paper and shouted, "I can see! I can see!" and then stood up and raised his cane in celebration. It was such a joyous moment for the whole team. 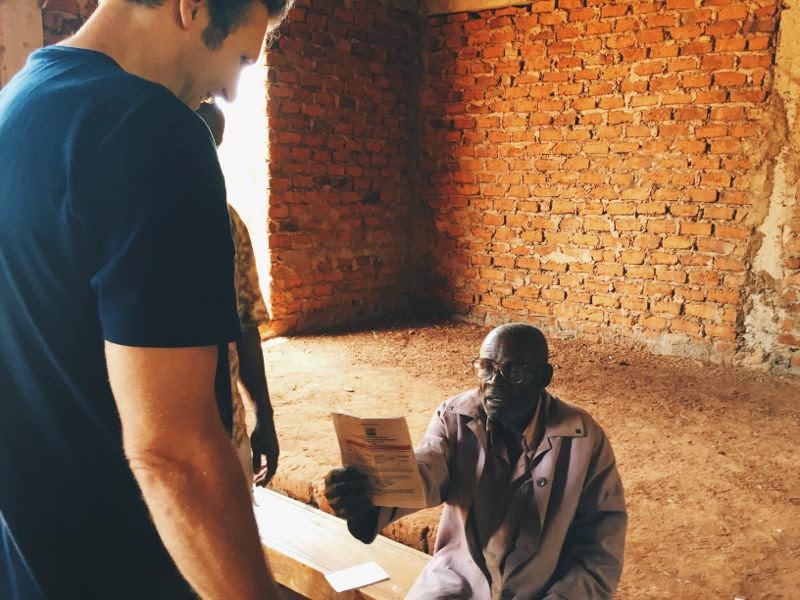 We needed a hand with translation today, since we had a few stations going. So Stonic and Denis, who typically get to nap in the car while they wait for us to be ready to go, came in to help us out. It was really, really fun to serve (and joke) alongside the two of them today. They are good dudes. 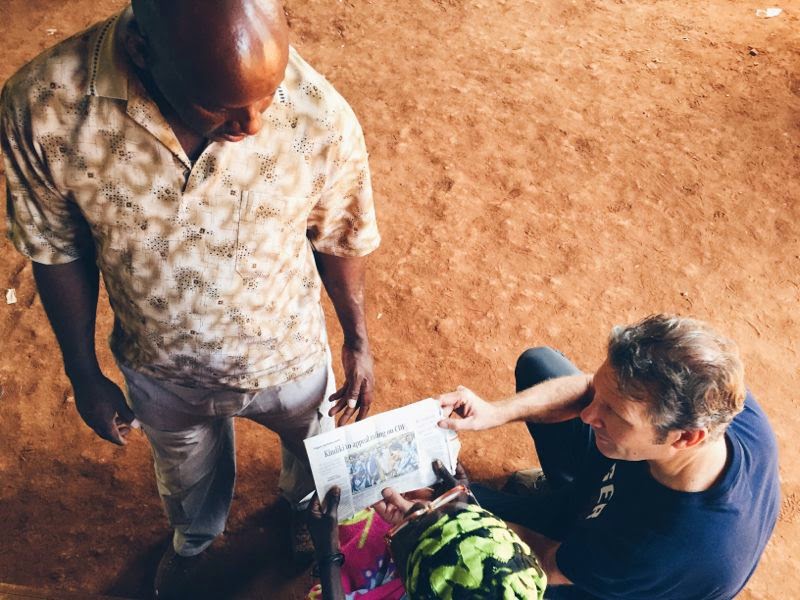 I was responsible for fetching the glasses from the containers and bringing them to the various stations. When there were lulls in the line, I tried on--and made others try on--some of the super thick, awesomely huge glasses. 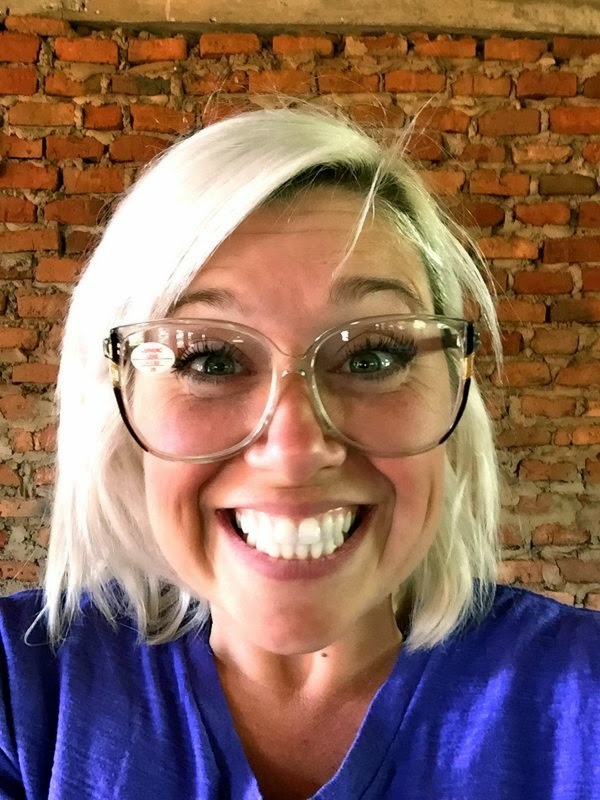 Sammy was so confused 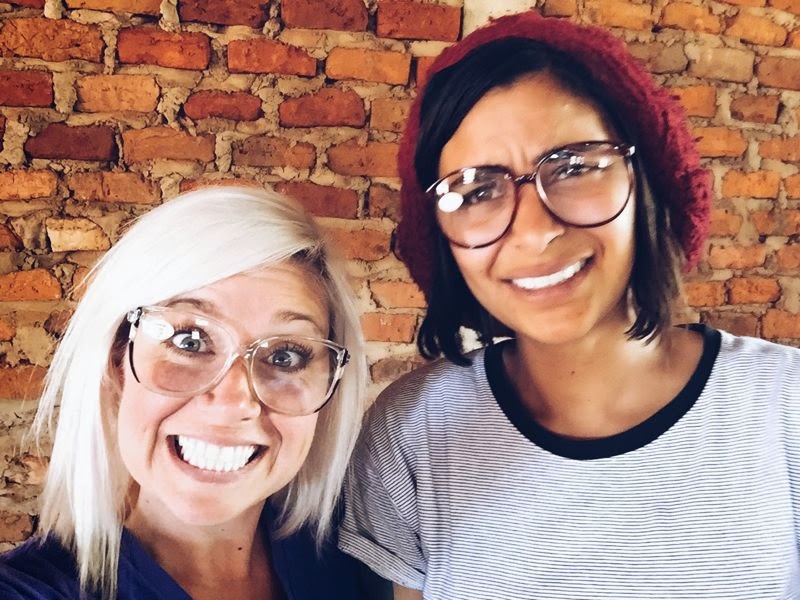 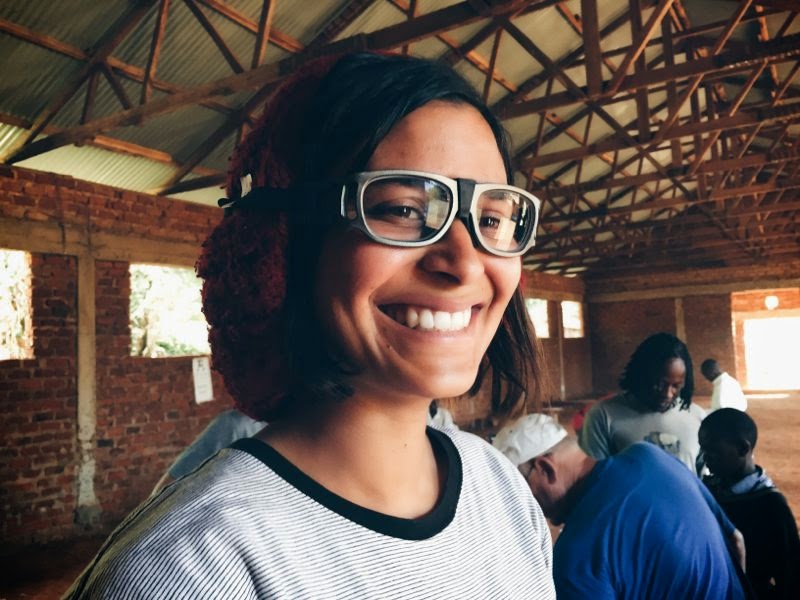 Stonic and I (jokingly) quarreled all day as I kept trying to give people the giant glasses and he kept telling me no one wanted them because they were too big and not stylish. As a punishment, I made him wear these...I can't wait until someone actually takes them! (Hopefully at tomorrow's clinic!) 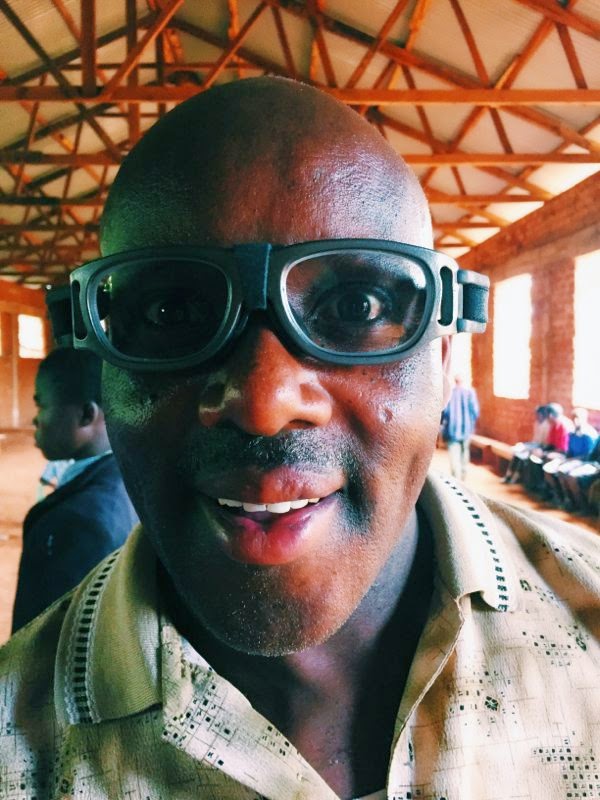 Even Denis was forced in to some sweet old lady frames. 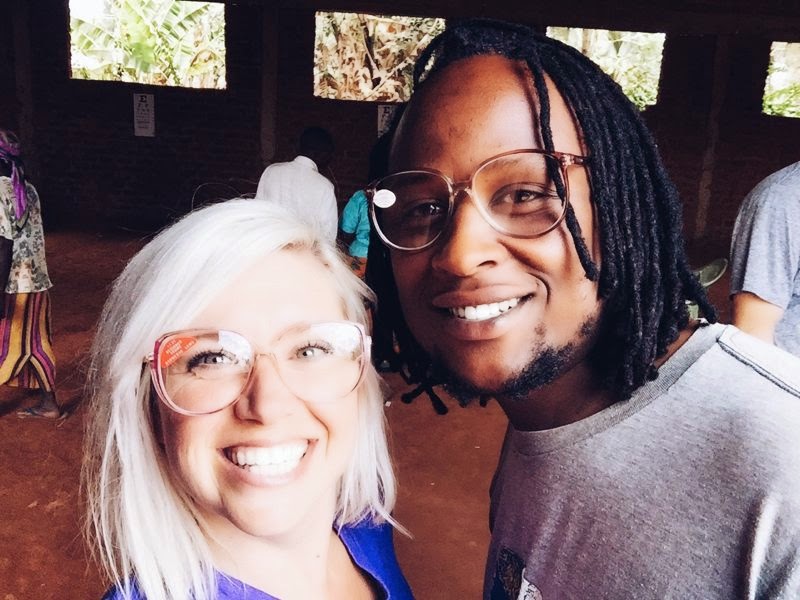 One of the kids from Sammy's home was taken back home by her mom. Since they live in the village we were in today, Lavender came by to hang out for the afternoon. So, obviously, Sammy kept trying different glasses on her too. She loved it! 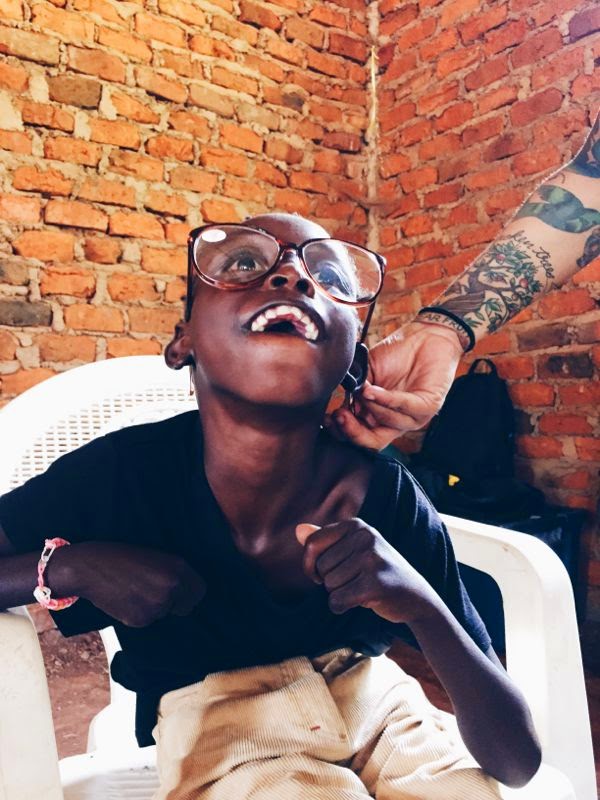 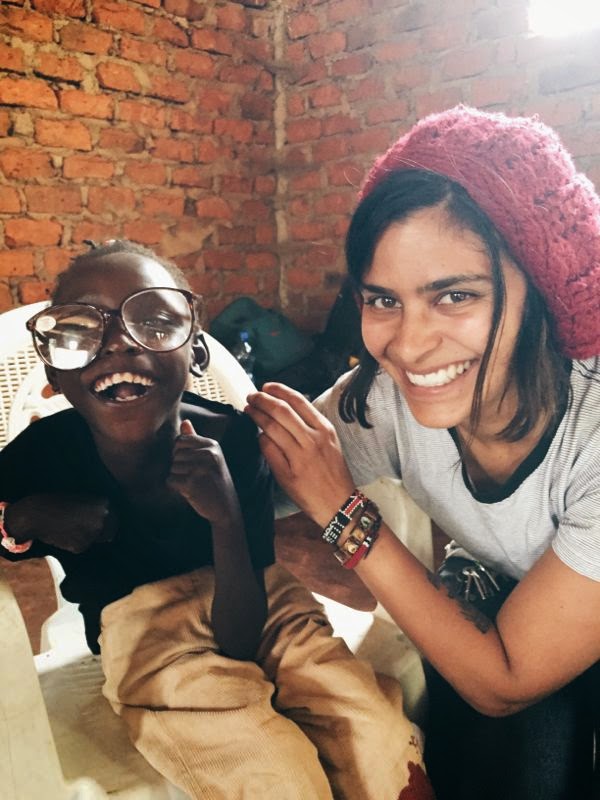 Sammy was calling her Grandma Lavender...and she couldn't stop giggling. 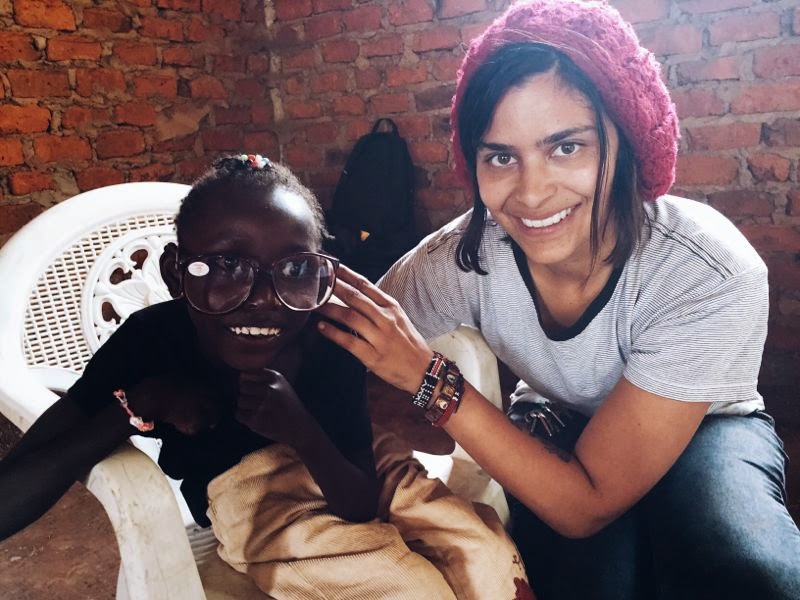 At the end of the clinic, this sweet girl came in. She told me her name is Valentine and chattered, non-stop, for the next twenty minutes. To me, to Sammy, to Denis and Stonic, to the other team members...anyone within earshot, really. At one point, she called one of the men on the team her 'new dad' and one of the guys said, "but you have dark skin and his is light..." to which she replied, "I see no color when I look at my dad!" Kid's hilarious. 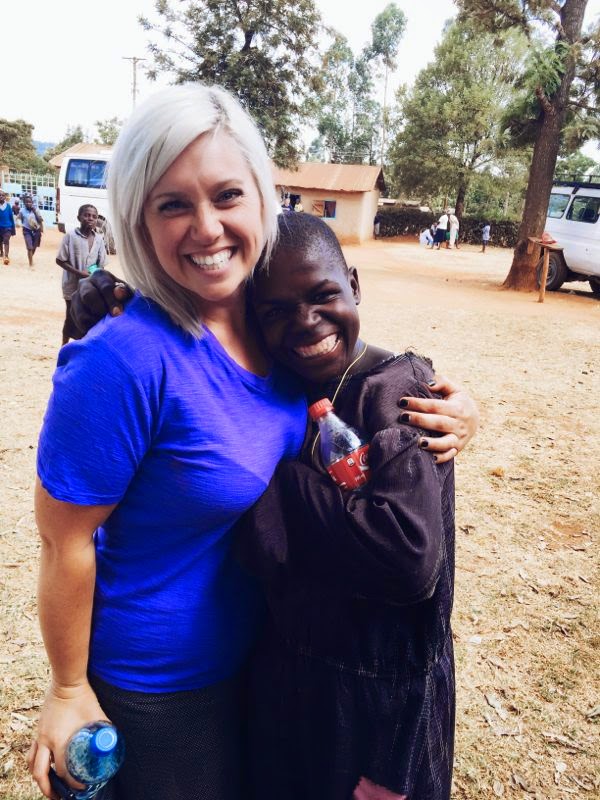 Sammy and I made a run to town before she went to visit a kid in the hospital. (I stayed in the car and stitched some clothing for her kids house...because I'm a hospital wuss.)

This evening, we had dinner at the Kitale Club with the team that's in town. Part of their trip includes a two-day conference for pastors (and their wives) from the neighboring community of Pokot. So, they had an additional 17 guests at dinner tonight. It was amazing to hear from the American team leaders (Don and Karolyn Thompson) all about the ministries that each pastor oversees. I'm really looking forward to visiting a few of their sites this week!

I'll leave you with this photo of Sammy on some sort of tractor...because she's a great sport when it comes to the number of ridiculous photos I make her pose for in one day. 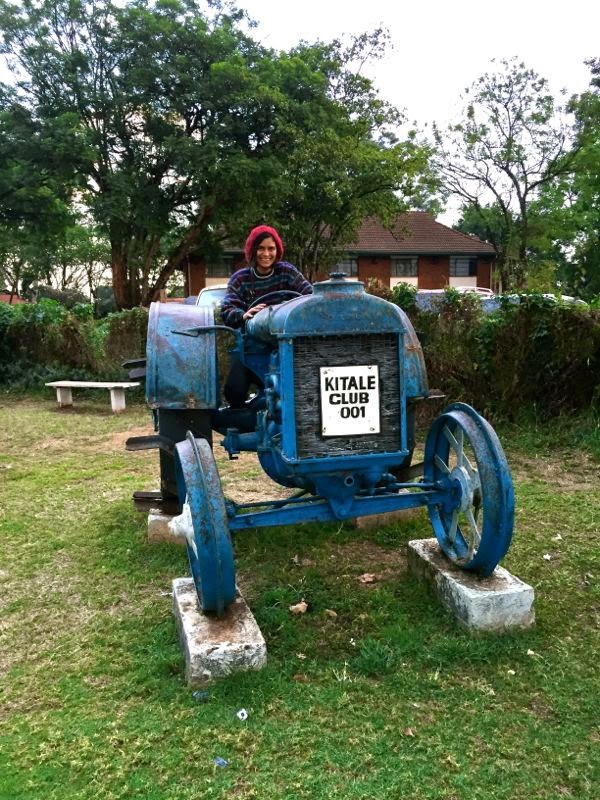 Oh, in case you haven't heard the news, I've decided to extend my trip by two weeks. There's a great explanation for all of that--which is more than simply loving Kitale and wanting to stay here (though that's definitely part of it!) I'll post more about that soon!
Posted by Allison at 12:37 PM

Hooray for the eye clinics! My favorite part of the Kenya trip I was on. You are SO right, you never tire of someone saying, "Thank you! I can see!!" Such a blessing.
I love you so much!
Enjoy!

I love your blog! Thanks for sharing...so fun to see what God is doing with the eye clinics! (See what I did there?)