On Wednesday night, Geoffrey took us to visit the homes of some of the Oasis kids. We brought a few gifts for each house: a blanket, laundry soap and a package of corn flour {from which a staple meal, ugali, is made}. Geoffrey, in his ever-organized way, had made a list of each kid's house, starting from the furthest home and winding us back to our house. It was so efficient...

These homes are all in Shimo La Tewa: a large slum in the middle of Kitale. Most of these families, from what we've heard, are single parent families. If there are two parents "present", more often than not, one {if not both} exists, but is not actually participating in life. Some of these parents get work when possible, but even then most of the money goes toward rent, and if there is money remaining, they buy food. Because there is not much "spare" money, these families can not send their children to school. {Kenyan public schools are free, but each child must buy a uniform, school books, supplies, etc.}

{A little bit about my thought process} It's easy, for me, to look at this neighborhood {and others like it--or worse} and question God. How can He allow such poverty. Where is the provision, the meeting of basic needs, for these families? I spent quite a while wrestling over and weeping about this. Then, I watched these kids arrive as Oasis of Hope each morning. Eating two meals a day, learning to read, write their names, do multiplication tables, recite Bible verses. Bathing, laughing, playing. Being taken to the hospital when necessary. It is Geoffrey and the Oasis of Hope staff {with huge financial help from Lydia and others} that are physical embodiments of God's provision to these kids. I love that God, in His timing, unveiled that lesson...I love that there are people who saw the need and did something to help.

Chris, Daina and I had made a similar trip last November. Of the twelve homes we visited, I had been to a few before. It was very fun to re-visit a few homes. It was also so sweet to walk through the back fields of Shimo hand-in-hand with a kid who is so excited to take us to his house, to meet his family, to show-off his white friends to his neighbors.

This is Peter {blue shirt and sweet blazer}
Peter's parents ran-off, leaving him and his little brother with his Aunt and Grandmother. 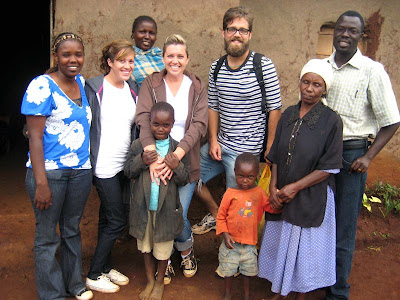 Here is Knight {yellow shirt}. Knight lives with her mother and 6 siblings. 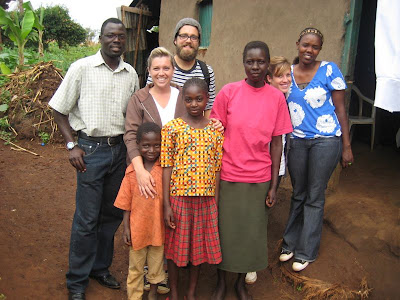 Here is Brenda and her sister, Nancy.
The girls are the only two children and live with both parents. 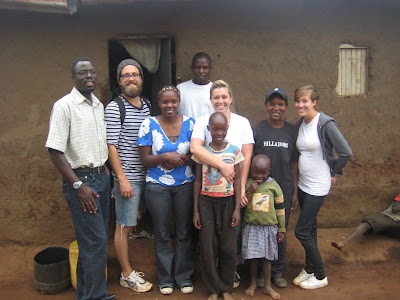 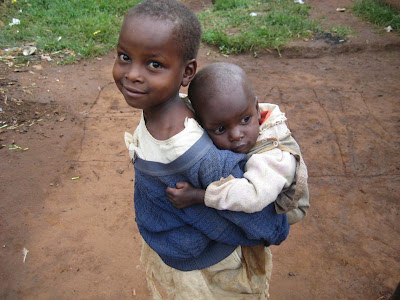 This is Ferdinand. He and his sister, Bevin, live with their father.
Both are in Bre and Leila's {in the blue} class at Oasis. 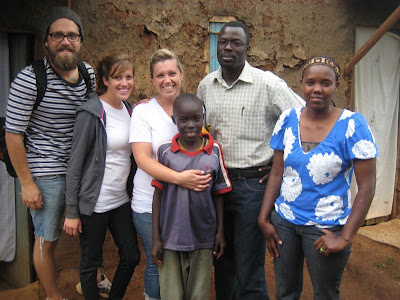 This is Elizabeth {checkered dress}.
Elizabeth is one of 11 children.
She lives here with her smiley mama who was so happy that we came to visit that after we prayed for her, she prayed for us. 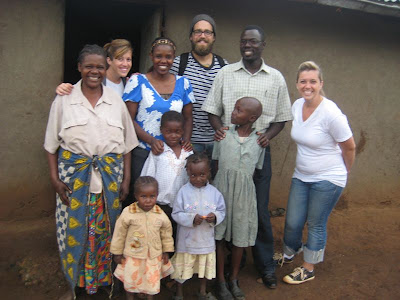 This is Celine {green jumper}
She lives with her brother and their Grandmother.
Oh, and their dog, Rocky. 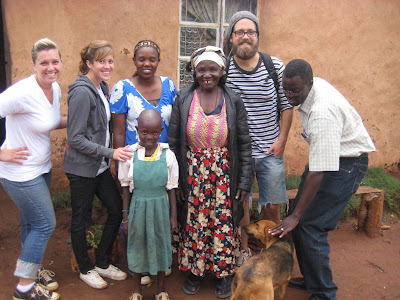 This is Rispah {black and red sweatshirt}.
Rispah's was one of the houses we'd visited last year, too.
She is the oldest of 6 kids...5 girls and one boy. 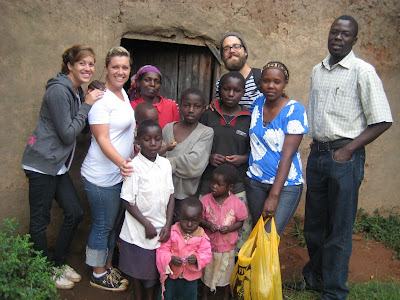 We were followed through Shimo by an Oasis boy on a bicycle. He knew it was almost his turn to lead us to his home.
This is Tom {blue sweater}.
He and his brother, Kevin {black zip-up}, and his sister, Elizabeth {who has TB and had gone for treatment with their mother} attend Oasis each day.
We were greeted by an older brother who lives in this home with them. 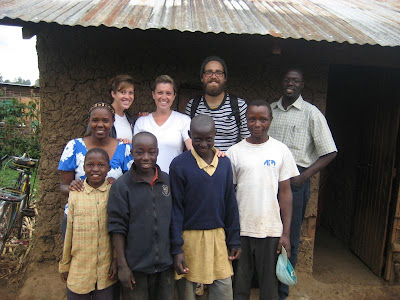 After Tom's house, it was time to walk across the Shimo Bridge. Geoffrey had arranged for Dan {our taxi driver} to drop us before the last house and drive to the other side of the bridge, so we wouldn't miss this. Seriously, so efficient.
We were met by Brenda and Nancy...and about 10 other neighborhood kids who had heard there were some white people walking around handing out candy. 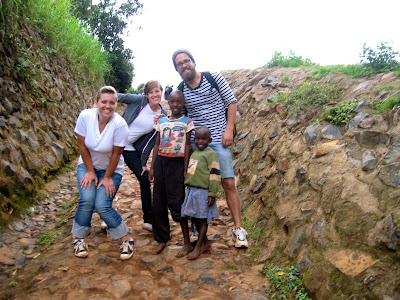 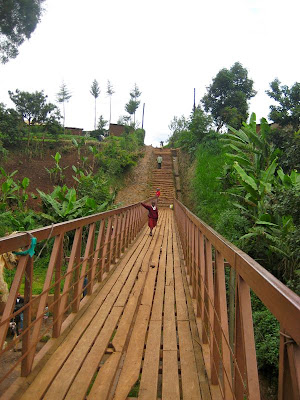 We asked Manu to walk down in to the valley below to take a picture. 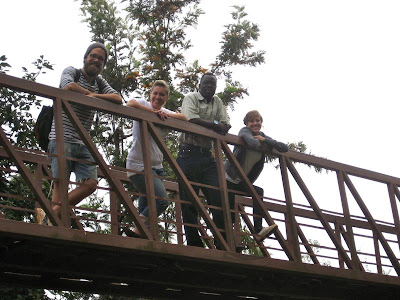 On the other side of the bridge, we visited some familiar families...

These are {left to right}: Jennifer, Esther and Celinah.
They live with their mother, who is holding baby Chris {named after Chris Wohlers, which only makes me love him more} and their other brother John.
These girls are, easily, some Oasis favorites...they have the best personalities and love to dance and sing. {Bre taught them the Macarena...which is only cute because they are so tiny...and is definitely getting old} 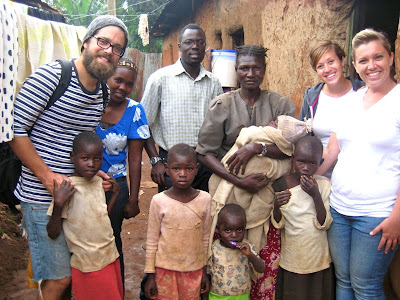 Speaking of Oasis favorites, this is Alfayo {yellow shirt}.
This summer, Alfayo was crowned "King of Shimo". They even held a parade in his honor.
Alfayo lives with his mother, sisters {Mercy and Evelyn} and little brother, next door to the sisters pictured above. 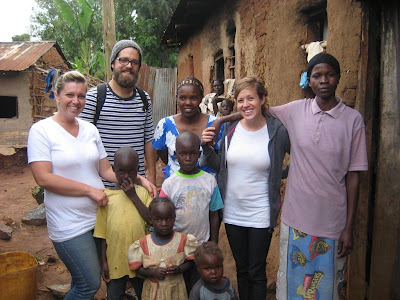 This is baby Peter. He is the youngest of the family that has the most children involved in Oasis programs. His mother has been known to say, "I have babies and then give them to Geoffrey." 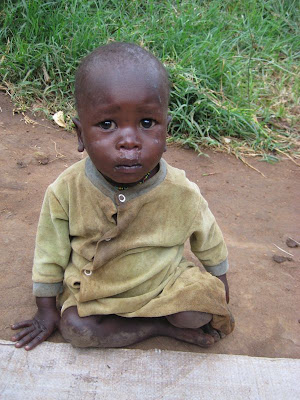 This is Peter's mama. 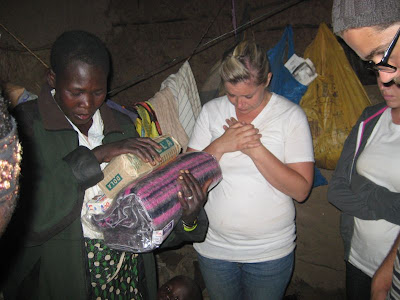 And this is half of the family. The mama {and present, but not contributing father} live in this small room with the three children still at home {left to right} Peter, Lucy and Erica.
They have four other children: Patrick {Oasis Boys House 1}, Christine and Ajikon {Oasis Girls House} and Irene {boarding school at Kitale Family School}
This mother has the strongest DNA of anyone I've ever seen...each of her six children looks exactly like her. 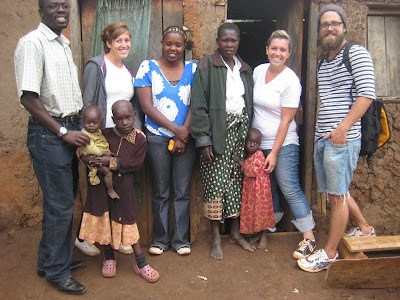 Our last stop was Christine's {flower top}. Christine and her 4 siblings live with her parents on a small farm across from a beautiful field of sunflowers. This was the only house that Geoffrey did not have to translate what we said because her mother understood English very well. 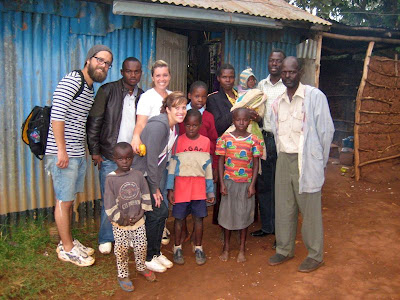 It was interesting to come home and make mental lists of all of the other things it would be great to "gift" those families: mattresses, sugar, beans...nothing fancy, just some "luxuries"...
Posted by Allison at 9:48 PM