This morning, I woke up to a few Happy Birthday texts (including one from the local grocery store where I had applied for a "super saver" card) and one from Chris that said, "Happy Birthday, we went to town, we'll be back soon."

I got up to have a cup of coffee and saw this that had been slid under the door:
I have been looking at the Amazon Kindle for over a year now... 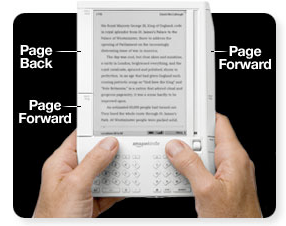 and Chris knew how much I wanted one. So, his card is a fake kindle. 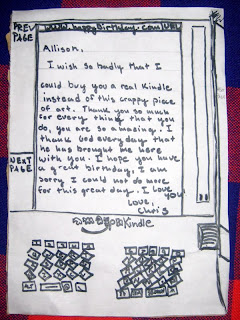 I opened my email to find a bunch of H.B emails...and some facebook notes on my wall: 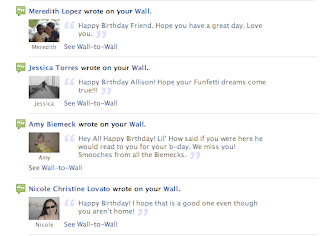 Daina and Chris came back from town with a few surprises...Oreos (and something that I had to close my eyes while they brought inside).

While I was reading my email, my dad called...so I talked to him for a while, catching up on life here and life there...it was great to hear his voice.

I ate some delicious French Toast and then was surprised by "Happy Birthday" being sung in Ukrainian. Umi, Julia and Tanya came in singing and gave me this painting: 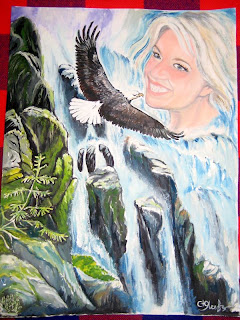 Julia painted it...isn't it beautiful? I can't wait to frame it in my house back home!

We headed out to Captain Davis' to ride a camel.
When we arrived, we were caught off-guard. Clearly, we were the only people in the whole camp...We signed the guest book (Chris wrote under "Purpose for Visit": Adventure).
We quickly inquired about the camel rides and were told that the camels are in Farm B and we were at Farm A, so no camel rides today.

No big deal, they did have a miniature safari park: we walked through mud and brush to get to 2 rhinos (Celinah and Mike--which he called by name as if they were dogs who would come running over), a bunch of zebra, Thompson gazelles and Elans.
This was our tour guide--he quickly became Chris' best friend. 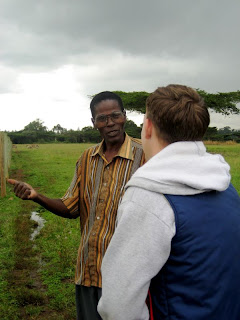 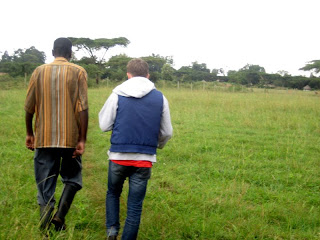 As we stood talking to the animals, it began to rain...we started our walk back just in time for it to begin pouring! We ran to the restaurant to sit and have something to drink while we waited for the rain to die down.
From the window of the restaurant, we could see that they even had a giraffe. They had said we could feed it, but we ran out of time...next time, for sure! 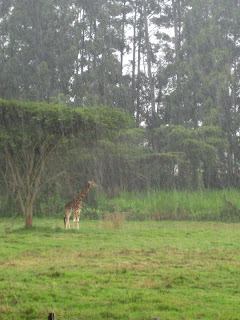 We actually had the pleasure of meeting Captain Davis himself. He was a Bill Cosby-type man, who used to be a pilot (thus the title) and has three sons, all of whom live in America. 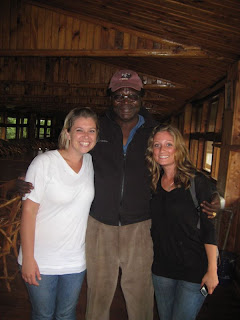 We chatted with him as the chef prepared lunch: chapati and rice. And then we were given a tour of their camp grounds and other accommodations, in case we want to visit for a weekend. 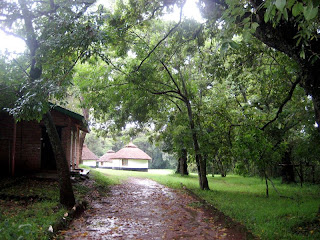 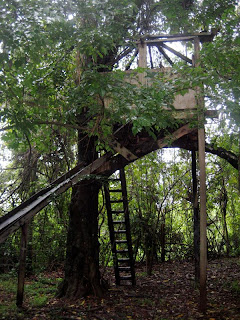 We arrived at the stables and they had saddled up two horses for us. Evidently, one horse has the value of 4 cars, so they are hard to come by in Kenya...riding a horse here is a big deal. So Daina and I went for a short, guided horseback ride. 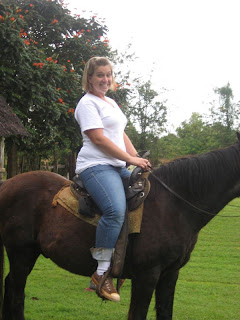 Chris waited at the stable, and somehow convinced them to saddle up the ostrich...He was SO excited. (Did you know an ostrich blinks from side to side, not from top to bottom?)
Look at his face: 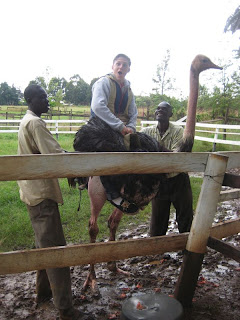 I had hoped for a camel, but settled for an ostrich...I was a little freaked out getting on...and the feeling of the wing bones on my legs (they lift the wings so you can put your legs under to hold on) was really weird. 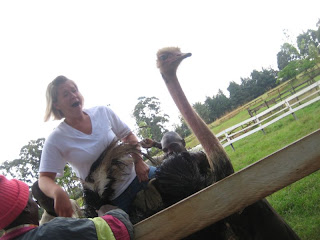 We went once around this stable, since it was too wet for the ostrich to go much farther through the mud. For the last five feet, they let the ostrich run...and I was pretty sure I was going to fall off. 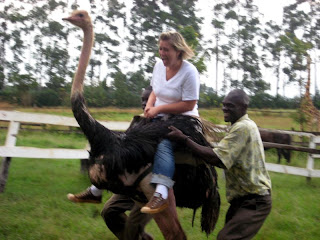 Daina actually fell off in the end. This is one of the only photos we have of her riding because Chris had the camera and was too afraid she was going to get hurt...so instead of documenting her ostrich-riding-problems, he just stood there and watched her scream...which was really funny. 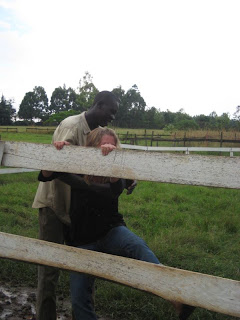 We said our goodbyes to Captain Davis and then headed back home.
Right now, Daina's preparing dinner: chicken nachos (chips made from ugali that was fried to be like corn chips--tasty)...and we're going to watch a movie (if the power stays on in this rain!)

oh my gosh...what a fun/funny day! I laughed out loud at the picture of you when the ostrich was running. I hope you had a great birthday and that you know how loved you are all around the world!

I have so many things to say about this post.
1. The best part of Chris' Kindle is the url.
2. The painting makes me think of something my Grandpa Vic writes in birthday cards for Jonathan and me "May you soar on the wings of eagles!"
3. Have you told Chris how much I love the word adventure?
4. The wings over your legs while you are riding the Ostrich totally freaks me out.

Happy Happy Birthday! (Even though as I write this...it is 12:06 on Saturday morning there which means your birthday is over!) That is why I sent you a Happy Birthday message on myspace a week or so ago when I got the notice that your birthday was coming....I apparently have dementia and can't remember anything for more that a minute!)

Glad you went to Captain Davis's. That is where we camped with the kids last year for their end of term reward. And it rained the whole night and we were in tents!!!!

Ask Geoffrey to tell you about Captain Davis!

Love you and I hope your birthday was terrific!
Lydia

PS...I am teaching myself to make corn tortillas from dried corn (soaking, cooking, grinding, pressing into tortillas and then cooking on a cast iron grill) so that we can make REAL tortilla chips for our nachos!)

That day totally beats the crap out of a(nother)Fuddrucker's burger! Love Chris' gift...love all the people who love you!
Riding an Ostrich? You should have put that on your '30 things to do before 30' list! That's HUGE!!
Love you so.
It's still October 24th here. And I'm thinking of you...
:)

This post made me smile and laugh!
Seriously, I laughed and had a crazy grin on my face the whole time I read it!

I LOVE that painting!

Your settling for an ostrich was classic! I can't believe your friend fell off!

Your birthday is still alive and kicking in America...so Happy Birthday again!

Such a great day. next year you will be with all of your friends and family saying, i remember last year... i was in Kenya on my birthday mounting an ostrich and big black horse. what a great day that will be. happy birthday friend :)
amanda

Virus' grandma says you can buy Chipati at Costco!