We went to our first Kenyan wedding on Saturday. (I tried to post sooner, but the Internet wouldn't let me post photos...and this story's so much better with the visuals)
You can read more about it here.

Here's Lydia, Steve and Geoffrey in their wedding clothes: 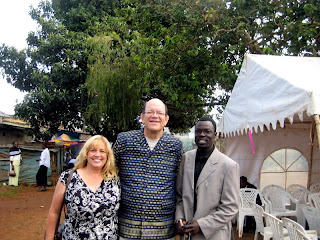 The invitation for Joseph and Irine's wedding said 10am. We arrived around 10:30 (which killed me a bit, since I hate to be late). We sat in the front row and then moved to the middle to save room for family members. When we arrived, we were told there was pool for the starting time...Steve jumped in to the end of the bet and chose 12:45pm. 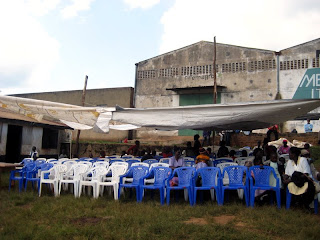 Around 11:30, the choir began to sing (but, I'm fairly certain they only knew three songs--so they sang them on repeat). 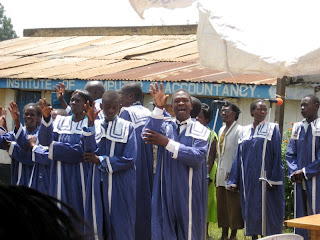 Here's us after a few hours of waiting for the wedding to start. (Chris ate seven pieces of gum in three minutes just to keep from going crazy). 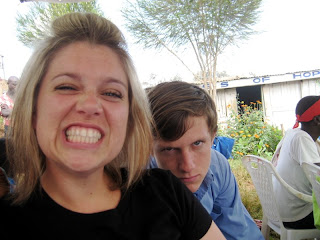 Then the tent fell...Caroline's hand shows where it is in relation to her head. (Look how funny Lydia thinks it is!) 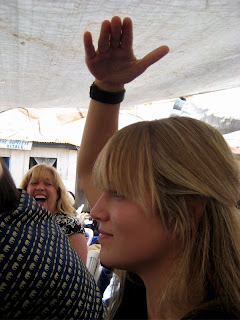 This baby was sitting in front of us and the mom just turned around and handed me her baby...seriously...but she's cute, right? 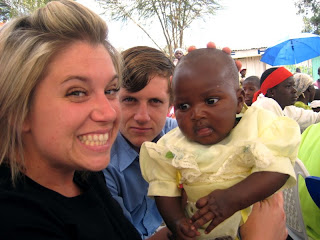 Steve fell asleep before the wedding began...and funnily enough, he won the bet! The boys processional began around 12:40. The girls came in around 12:45 and took about 8 minutes to walk down the aisle. 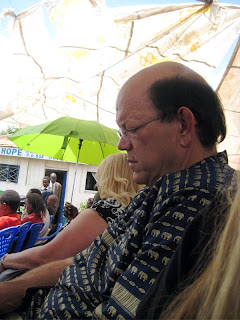 They began with congregational singing, then a prayer, then a message about the importance of marriage. From there, the choir sang a song, another prayer, another pastor sharing. In the middle of the ceremony, this man behind me said, "Sista...peekcha!" So, I took a picture with him. Then he said, "Wait!"...and he put his hat on and made a motion for me to take another photo...Then I took one of just him...and he pointed to it...and his wife went nuts for the photo...she was SO happy. 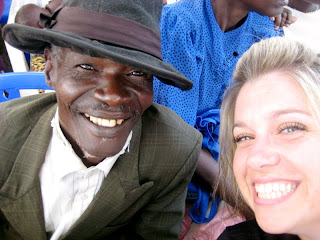 Then, Chris fell asleep...Oh, and see the girl sitting on my lap? She had a bug on her shirt...and here's how I know: the woman behind me reached OVER ME to grab the bug, show the girl, smash the bug and WIPE THE BLOOD on the little girl's shirt. Oh, and then tap the woman next to her and show her the blood. Yeeks. 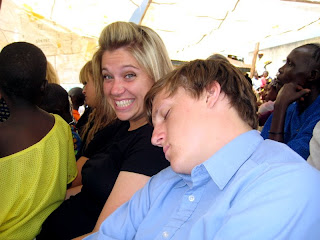 The bride and groom came up to the front and said the vows, and then exchanged rings. The choir came to sing again and the pastor prayed... 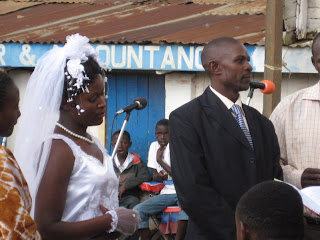 but it began to rain during the prayer, so he cut it short. Everyone ran inside where we played a round of celebrity, ate some wedding cake, drank soda and ate the wedding feast (chapati, rice, chicken and beans). It was such a yummy wedding feast...

After the wedding, we came home and relaxed...which was excellent after a long, long day of sitting in the sun (and then rain). Megan and I made dinner (baked beans from a can, white rice--which I burned--and tuna...so classy) while Caroline and Chris played ping pong. (We sang, "Ping pong, pa-pong, pong, pong...get it?)

After dinner, we played World Series of Pop Culture...boys against girls...the boys won (just barely)...
Posted by Allison at 11:47 AM

THat baby girl is SOOO cute!!!

I hope your having a great time in Kenya!!

Did you know the people getting married or did you crash the wedding? And, did you keep the baby? She's pretty cute.

hug caroline for my family!